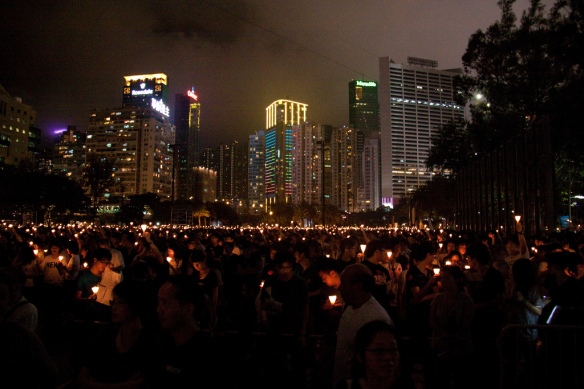 We must say it loudly and clearly: The Chinese Communist Party’s vision of fake democracy for Hong Kong is far worse than no ‘reform’ at all.

The reason we feel compelled to shout this over and over again is that in the wake of the National People’s Congress Standing Committee announcement of August 31 that ‘universal suffrage’ in Hong Kong will be so circumscribed that it will not resemble genuine universal suffrage at all, there have been quite a few people both in Hong Kong and elsewhere who have made comments to the following effect: Well, it might not be perfect, but it’s better than nothing, or, A little progress is better than no progress at all. This is just what the CCP wants you to believe; it is trying to pull the wool over our eyes by saying it’s introducing ‘universal suffrage’ when in fact it’s trying to do just the opposite, ensuring that genuine universal suffrage will never come to pass in Hong Kong.

And to those who say, A little progress is better than no progress at all, we say, THIS IS NOT PROGRESS; IN FACT, IT’S JUST THE OPPOSITE!

OK, sorry for shouting. We’ll calm down now. But it really drives us crazy how, after all these years, there are still people who are tricked, whether willfully or innocently, by the CCP’s deceptions. And from now until the NPCSC-inspired Hong Kong government proposal on electoral reform comes before Hong Kong’s Legislative Council, probably around the end of the year, this is the constant drumbeat of propaganda you will hear: Take this improvement and perhaps more will come later. Watch out, Hong Kong, it is a siren song that spells your doom! (Oops, we’re shouting again.)

Essentially, what the CCP is asking Legco to do is to acquiesce in a lie, to be complicit in the deprivation of our basic right to genuine universal suffrage, to participate in our own subjugation, and in so doing, to give a veneer of legitimacy to the illegitimate. The CCP’s proposal for fake democracy would make all Hong Kong electors one big rubber-stamp committee of the CCP’s choices for Chief Executive. If the CCP ever managed to pass fake democracy, it would be the end of any ‘political reform’ at all in Hong Kong, at least as concerns the Chief Executive. The CCP would say that according to the Basic Law, the objective of political reform is universal suffrage and now that ‘universal suffrage’ is achieved, there is no need for further reform. It would further say that Hong Kong people themselves ‘chose’ this ‘universal suffrage’. The only ‘reform’ that would occur would be further rigging of Legco, which is set to be elected by universal suffrage in 2020, and passing fake democracy would give the green light to the CCP to introduce CCP-style ‘universal suffrage’ in Legco as well.

Fake democracy is a crucial step in the CCP’s end game for Hong Kong— de facto control of as much of Hong Kong society as possible through its United Front of tycoons, business associations, pro-CCP political parties, and ‘patriotic organizations’ (which was on full display during the antiOccupy campaign) and formal control of Hong Kong’s political system. Of course, the CCP chooses the Hong Kong government; its fake democracy would simply formalize and legitimize the status quo. We must not grant it any legitimacy at all. In fact, now is the time to say loudly and clearly that the Hong Kong government is not legitimate because it is not chosen by the people, and the fake democracy that the CCP intends to foist upon Hong Kong would be illegitimate as well. Fake democracy would perpetuate Hong Kong’s chronic crisis of government lead by a weak, ineffectual Chief Executive without popular mandate. Of course, defeating it would perpetuate the current situation as well, but we have told the CCP that Hong Kong needs genuine universal suffrage to resolve its governance crisis, to no avail. Defeating fake democracy is also integral to continued resistance to the steady and increasing mainlandization of Hong Kong society.

It may seem an uphill battle (because it is!), but human rights don’t come easy. As Martin Luther King, Jr. said, “Freedom is never voluntarily given by the oppressor; it must be demanded by the oppressed.” Prior to the NPCSC decision, some still lived under the delusion that somehow the CCP would simply hand Hong Kong genuine universal suffrage on a platter. This is to misunderstand the CCP’s Leninist DNA. The NPCSC decision has liberated these people from their delusion. Previously, people could say, We’re fighting for genuine universal suffrage. Now, we must say, we’re fighting against fake democracy. It’s less inspirational maybe (and long-term, our fight is still for genuine universal suffrage), but then again, Hong Kong people have already shown ourselves to be adept at fighting against impositions from Beijing, defeating draconian Article 23 security legislation in 2003 and ‘patriotic’ education in our schools in 2012. When our backs are against the wall, we don’t back down. And contrary to the widespread misperception that everything in Hong Kong has been pretty much fine since the handover, as the 2003 and 2012 campaigns show, we Hong Kong people have had a lot of experience of having our backs up against the wall since the handover.

The introduction of fake democracy would represent Hong Kong people’s full capitulation to the CCP. It would formally mark the end of ‘one-country-two-systems’ and would usher in an era of increased mainlandization. Long before 2047, Hong Kong would become just another Chinese city. Some say, Well, what if there’s no reform? Yes, what if? There would be uncertainty. As there is now. The uncertainty of no reform is far preferable to the certain doom of fake democracy, as it means there’s still a chance, however small, and the continuing governance crisis would show the failure of CCP double dealings on Hong Kong.

Fortunately, we Hong Kong people have the power of the powerless, and the next post will be about how we will block fake democracy.

Disclaimer: Views and opinions expressed in this blog are those of the authors and do not necessarily reflect the official policy or position of Occupy Central with Love and Peace.