Police have launched an investigation into the alleged beating in the early hours of this morning of Civic Party member Ken Tsang Kin-chiu as pan-democrat lawmakers labelled the attack an illegal punishment.

Earlier this morning, broadcaster TVB aired video footage showing a group of plain-clothes policemen dragging a handcuffed protester away from the main crowds in Admiralty before kicking and hitting the man, later identified as Tsang.

Police launched a major clear out of the Lung Wo Road area in the early hours of Wednesday morning, using pepper spray on protesters and arresting 45 people.

”From what we have seen, Tsang was already handcuffed [with plastic handcuffs] … and taken to a dark corner and beaten up,” Civic Party leader Alan Leong Kah-kit said.

“This use of power and police force is a blatant abuse of power, and from the look of it, the [officer] should at least be investigated on assault to [induce] actual bodily harm.”

The director of public prosecutions should also intervene, Leong said. 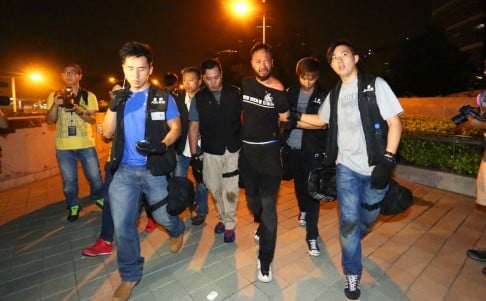 Ken Tsang is led away by police before the alleged beating. Photo: Nora Tam

A few hours after the video footage was aired, photos emerged of Tsang showing several bruises on his face.

Speaking to the media before attending a Legislative Council meeting, Secretary for Security Lai Tung-kwok said that “the personnel concerned have been transferred away from the current positions”.

In a statement, police said the footage that showed officers “who are suspected of using excessive force this morning”.

“Police have already taken immediate actions and will conduct [an] investigation impartially,” the statement said.

Police said that the Complaints Against Police Office had received a relevant complaint and the office would handle the matter.

Just before noon today, one of Tsang’s lawyers and Civic Party lawmaker Dennis Kwok said Tsang had been taken, under police escort, to Ruttonjee Hospital for a medical assessment. 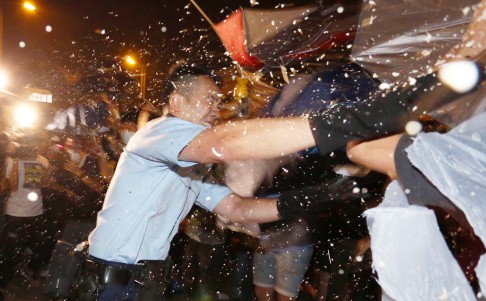 Kwok said that Tsang, who was initially held in a temporary detention centre at the Police College in Wong Chuk Hang, had been punched and slapped again at the police station.

“What [the policemen] have done us clearly criminal … and having them removed from their duty would be insufficient,” Kwok said.

In a statement, Occupy Central said Tsang did not resist, obstruct or pose a threat to police officers in the clear-out operation.

Any person not convicted by a court of law should be considered innocent and the police officers must absolutely not resort to extra-judicial punishment, the statement said. 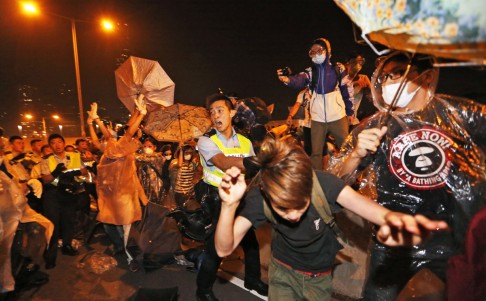 Secretary-general of the Federation of Students Alex Chow Yong-kong called the police action unreasonable and an abuse of authority.

“You can see [Tsang] had been dragged aside, meaning that he was in police detention,” Chow said, adding that it was a case of individual police officers taking out their anger on a member of the public.

“It is contradictory to the expectation of the people, who believe they are under the protection of the police,” Chow said.

“Police should explain, investigate and make an apology for this matter.”

“Police officers are supposed to protect the citizens and they should never let their emotions prompt them do anything illegal,” Law said.

Law said their observers, who had apparently put on their vests and helmets, were also attacked by the police as they monitored the clearance. 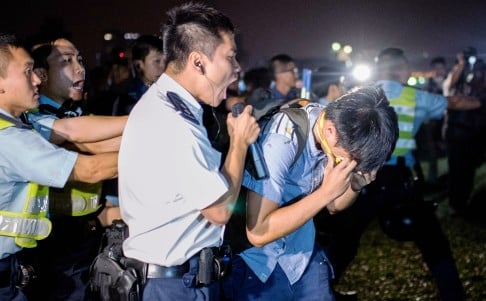 A police officer shouts at a pro-democracy protester after he was hit with pepper spray. Photo: AFP

“This is totally unacceptable and they have breached the Johannesburg Principles – an international standard which gives [human rights observers] the right to monitor the scene,” he said.

Law said the police’s “unprofessional act” last night was an “erosion of the police force’s image” and urged the police and its watchdog to investigate the case.

Tsang is also a member of the Election Committee representing the social welfare sector.

In 2012, Tsang was forcibly removed by security officials after he protested at the swearing in ceremony for Chief Executive Leung. Tsang called for the end to one-party rule just moments before former President Hu Jintao’s address at the Convention Centre in Wan Chai.