In the past, Hong Kong has usually had moderate politicians, reasonable media voices and neutral bureaucrats and business people with the wisdom and good humour to maintain some basic cohesion. Even after the Article 23 uproar, or Donald Tsang’s anti-democrat tantrums, some sort of civility returned. This time feels different. In its attempts to assert control, Beijing has polarized the city, and it looks permanent. If they’re going to use law enforcement agencies for political persecution stunts, what’s the point of being moderate and constructive?

Maybe Beijing will realize its tactics are overkill and counterproductive. Otherwise, the city is going to end up more alienated, more disgruntled, and less governable than ever. 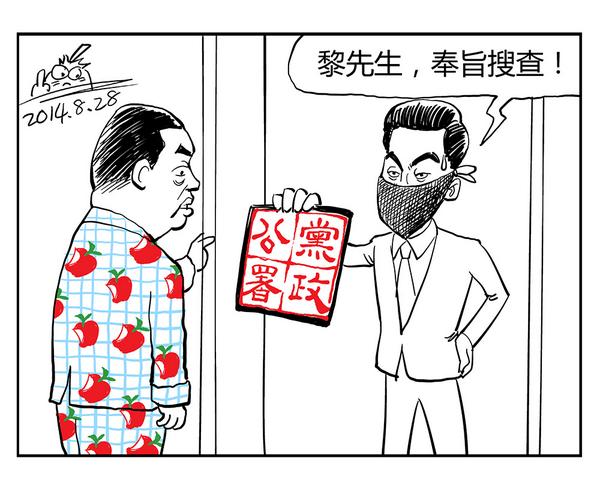 据说香港廉政公署今天一大早把黎智英先生堵在家里，我觉得香港再继续赤化下去的话，廉政公署变成“党政公署”的那天也不远了。 I heard Hong Kong’s ICAC went to Jimmy Lai’s place early in the morning. I feel that if communist encroachment in Hong Kong continues, it won’t take long for the ICAC to become a CCP agency.

Next Media Group chairman Jimmy Lai Chee-ying on Thursday appeared on a short video in response to an anonymous obituary published by a local newspaper, saying he is sorry to have disappointed the author for still being alive.

“The joke is not good enough because I don’t look like I have AIDS… Do you want me to die? It’s so easy. Just keep cursing me, and with your mother’s power, perhaps one day I will die,” Lai said. “I am sorry to have let you down.”

It was the journalistic equivalent of putting a horse’s head in your rival’s bed. Lai Chee-ying, 65, also known as Fatty Lai and a native of Shunde in the southern Chinese province of Guangdong, had died of AIDS and cancer on Aug. 7. Since his family members were also sick, there would be no funeral.

So read the full-page obituary, in boldface Chinese characters, on page A7 of the Chinese-language Oriental Daily on Thursday. Although one character in the man’s name had been switched to another one with the same sound, the other biographical detailsmatched those of Jimmy Lai, owner of a rival newspaper, Apple Daily, and a well-known supporter of Hong Kong’s pro-democracy movement. There was no indication that it was a paid advertisement. It offered condolences to the employees of “Two Media.” In Chinese, Apple Daily’s parent company uses characters whose literal translation is “One Media.”

OCLP is a nonviolent direct action movement that demands genuine universal suffrage in Hong Kong in compliance with international law, in particular one-person-one-vote and the right to run and be elected to office without unreasonable restrictions.